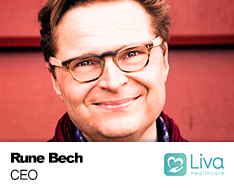 Rune Bech is the co-founder of Liva Healthcare, that is selected as a provider by NHS England for its high-profile digital diabetes prevention programme. Liva Healthcare already has a mature market in Sweden and Denmark, and are driving strong clinical outcomes through its platform for lifestyle change with a real human personal coach via an app.

Rune Bech is one of Europe’s “dotcom front-runners”. Already in 1998 he co-founded NetDoctor.com, the leading European health information portal. So far he had co-founded and sold three digital health companies in 21 years, with Liva being the latest venture with offices in London and Copenhagen.