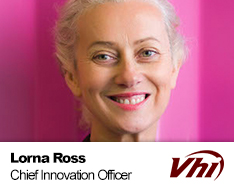 Lorna’s design career spans 30 years, with stops in the world of fashion, wearable technology, robotics, and most recently, health care. She is a futurist at heart, recognised for her ability to anticipate shifts in the social, cultural and economic context for design. She was one of the pioneering researchers to focus on wearable technologies and built a reputation for research activity in this arena.  She later identified the theme of health as an emerging arena for design to thrive.

She founded and led the Human Wellbeing Group at the MIT Media Lab. Her vision was to employ human centred design principles to address the biggest challenges facing the healthcare industry. She subsequently built and led the design group at Mayo Clinic’s Centre for Innovation from 2009-2017 before returned to her native Ireland to take up the position as the Group Director at the Fjord design studio inside Accenture’s global R&D centre The Dock.

While at the Dock she founded and led the Human Insights Lab before transition out in April of 2019 to take up a role with VHI Health & Wellness Group as their Chief innovation Officer.