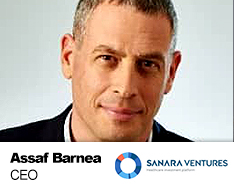 A seasoned entrepreneur and venture professional, with extensive, multidisciplinary experience in building innovation platforms and leading commercialization processes in healthcare.

Assaf chairs the Life Science Advisory Board at The Israel Export Institute, promoting and advancing the export of Israeli technologies in the medical, biotech, pharma and digital fields in global markets. A valued consultant, he also advises the World Bank’s IFC venture capital team and is a co-founder of the IFC’s Tech Emerge initiative, a unique acceleration platform connecting healthcare startups from around the world with leading corporations and hospitals in emerging economies.

Formerly, Assaf was one of the founders of CardioSense, a medtech startup that developed a probe for early shock detection in various medical settings.

Before lending his multidisciplinary acumen to Sanara Ventures, Assaf served as CEO of Kinrot Ventures, spearheading its acquisition by Hutchison Water in 2012. Prior to this, he headed business development at Mekorot, Israel’s national water company, where he oversaw the establishment of WaTech, the Entrepreneurship & Partnership Center for Water Technologies. For his accomplishments in both Mekorot and Kinrot, he received the Cleantech Group’s Innovation Hero Award in April 2013, which recognizes individuals whose commitment, drive and passion have made a tangible difference for innovation in general and specifically for many start-up companies.
Previously, Assaf served for four years as director of business development at Comverse, where he also co-chaired the Mobile Marketing Association.
A unique highlight in Assaf’s story is his former stint as a college basketball player at New Jersey’s Seton Hall University, where he won the Big East championship against Georgetown. He went on to play professional basketball in Israel’s national league, while completing multiple academic degrees.
A certified lawyer, Assaf holds both law and business degrees from the Interdisciplinary Center in Herzlia, and a BA in political science and psychology from Tel-Aviv University.